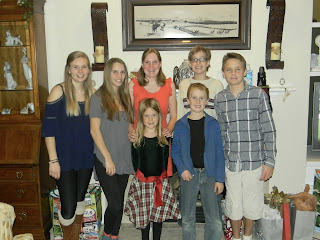 We go to Grandma and Grandpa's every year for Thanksgiving.
Because Grandpa grew up on a farm, consuming many turkeys, he doesn't like turkey.
So, we eat beef.
Grandma likes to make blueberry pie instead of pumpkin pie.

Typically, the grandparents head to AZ after Thanksgiving.
This year, they are staying until right after Christmas.
As it's their 10th year going to Tucson, and many of their friends have stopped wintering there, they don't have the same excitement about going anymore.
So we will also have a Christmas brunch at Matt and Jena's on December 23rd.

It's a fun tradition ... and a highlight for the kids, as they are given much money with which to shop.
Posted by Unknown at 8:12 AM