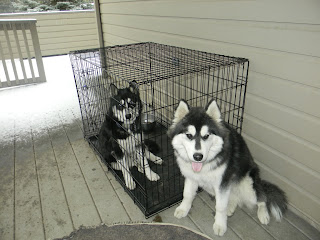 This has been one of the longest weeks - ever!
Dixie started bleeding last Saturday the 12th.
We've kept them apart for over a week now.

Yesterday, she went into heat ... sending "hormones" across the air waves.
Dash is going absolutely crazy.
He can't keep himself from her.
It's been almost impossible.
Dash has broken out of his cage twice now.
He has tried to break through the window to get to her.

With April birthdays, they are only 7 months old.
She simply isn't old enough to be a mama yet.
This is the first of 3 cycles that we will have to endure before she's 2 years old and can have pups.

They will make beautiful pups together.
But until it's healthy for them to do so, this is our scene...
one dog goes in, one comes out ... one is in the house, while the other is out.
It's overwhelming and exhausting, but I wouldn't trade these beautiful dogs for anything.
Posted by Unknown at 8:55 AM