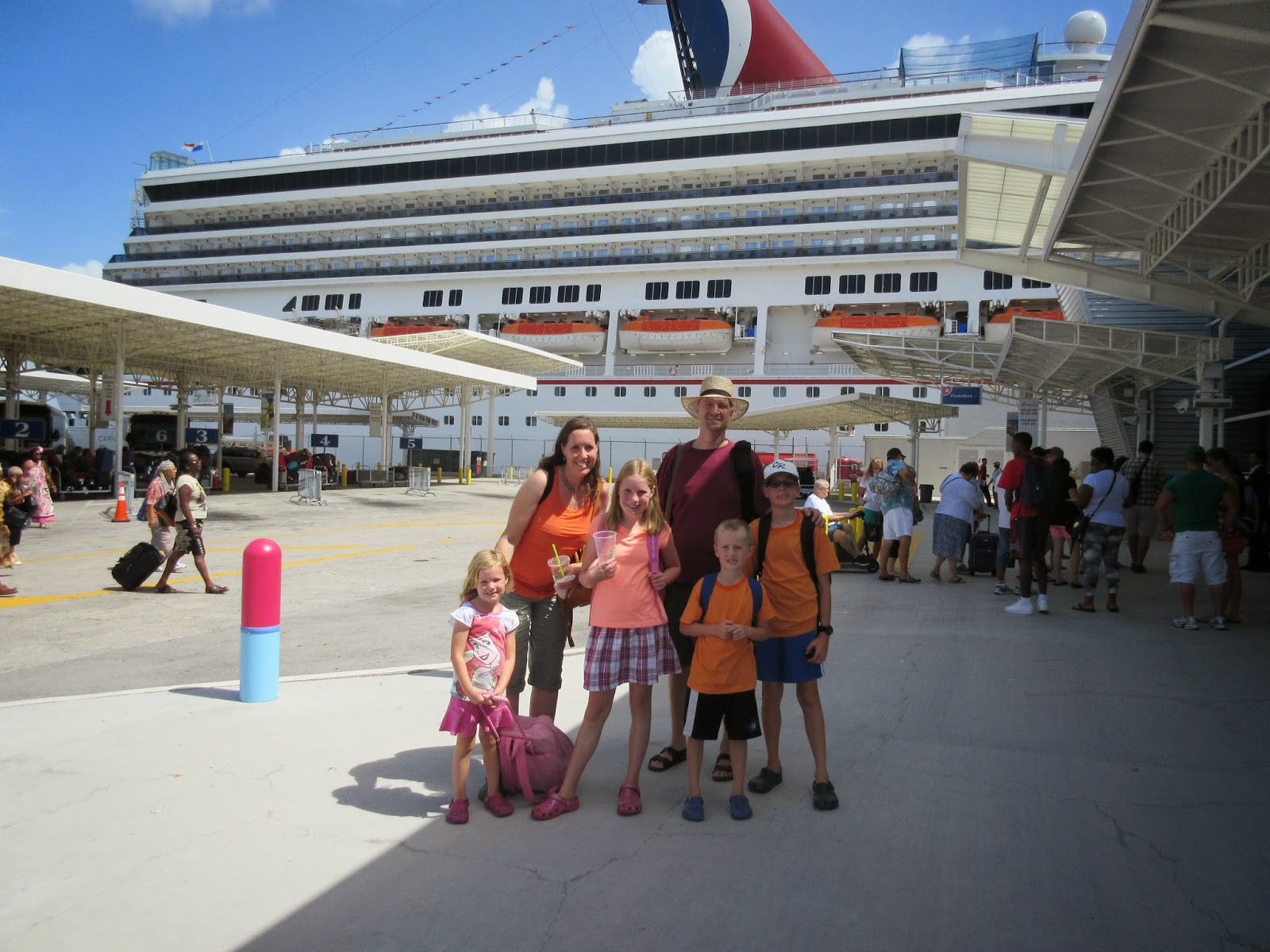 Sailing in the middle of the Atlantic Ocean.
We've been out here for 5 days now.

We spent a day in Miami, at South Beach, and with our dear friends the Torgrimsons.
Then Sunday morning, we boarded the biggest ship I've ever set foot on.
Twelve stories high.
A water slide.  Pools.
Putt-putt.  Shopping.  Restaurants.
Scheduled activities for every hour of every day. 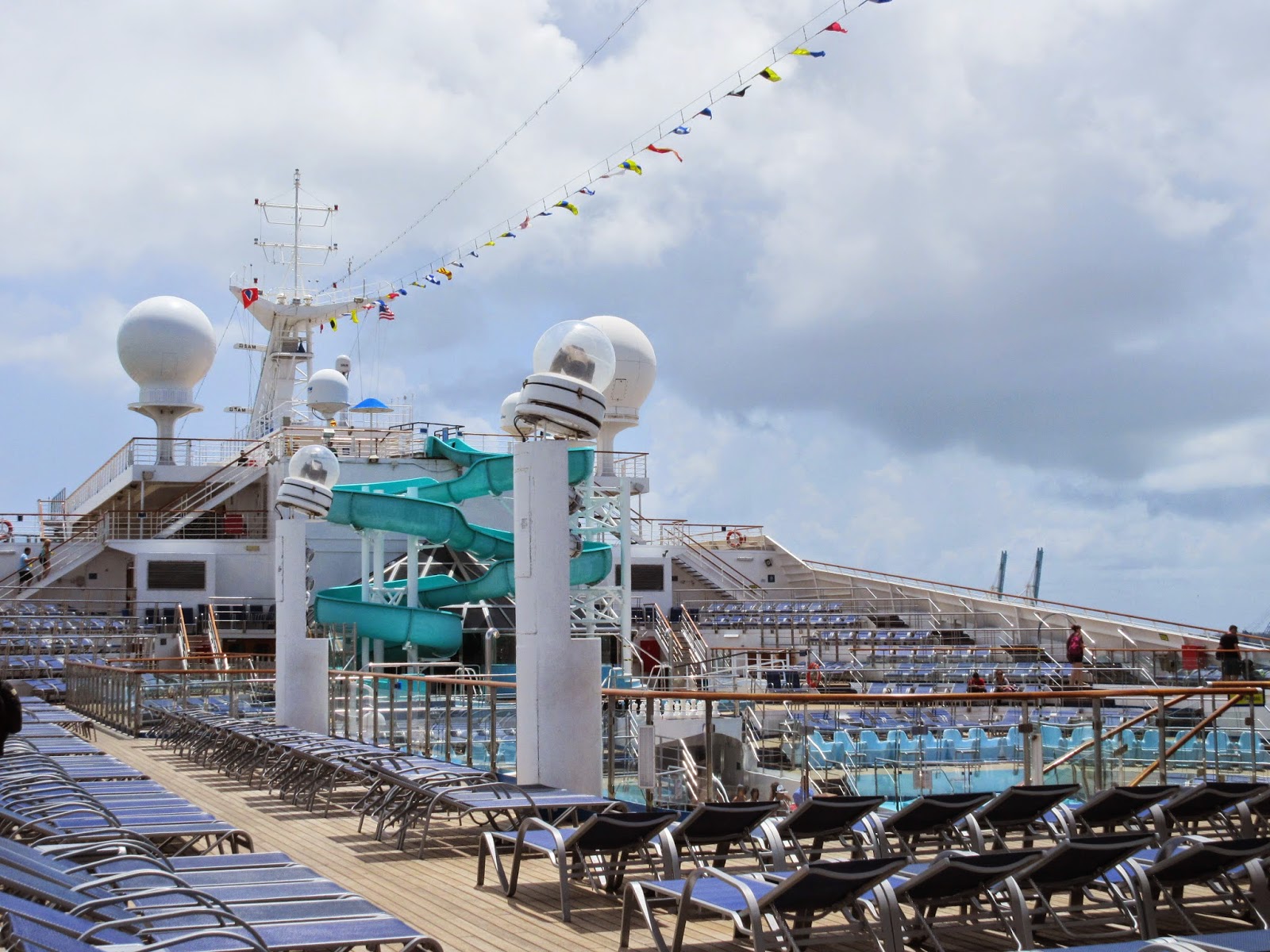 On Monday, we played in the ocean at the Bahamas.
Half Moon Cay is an island owned by Carnival.
A private beach.
White sand.  Warm water.
Lunch was provided
It was awesome. 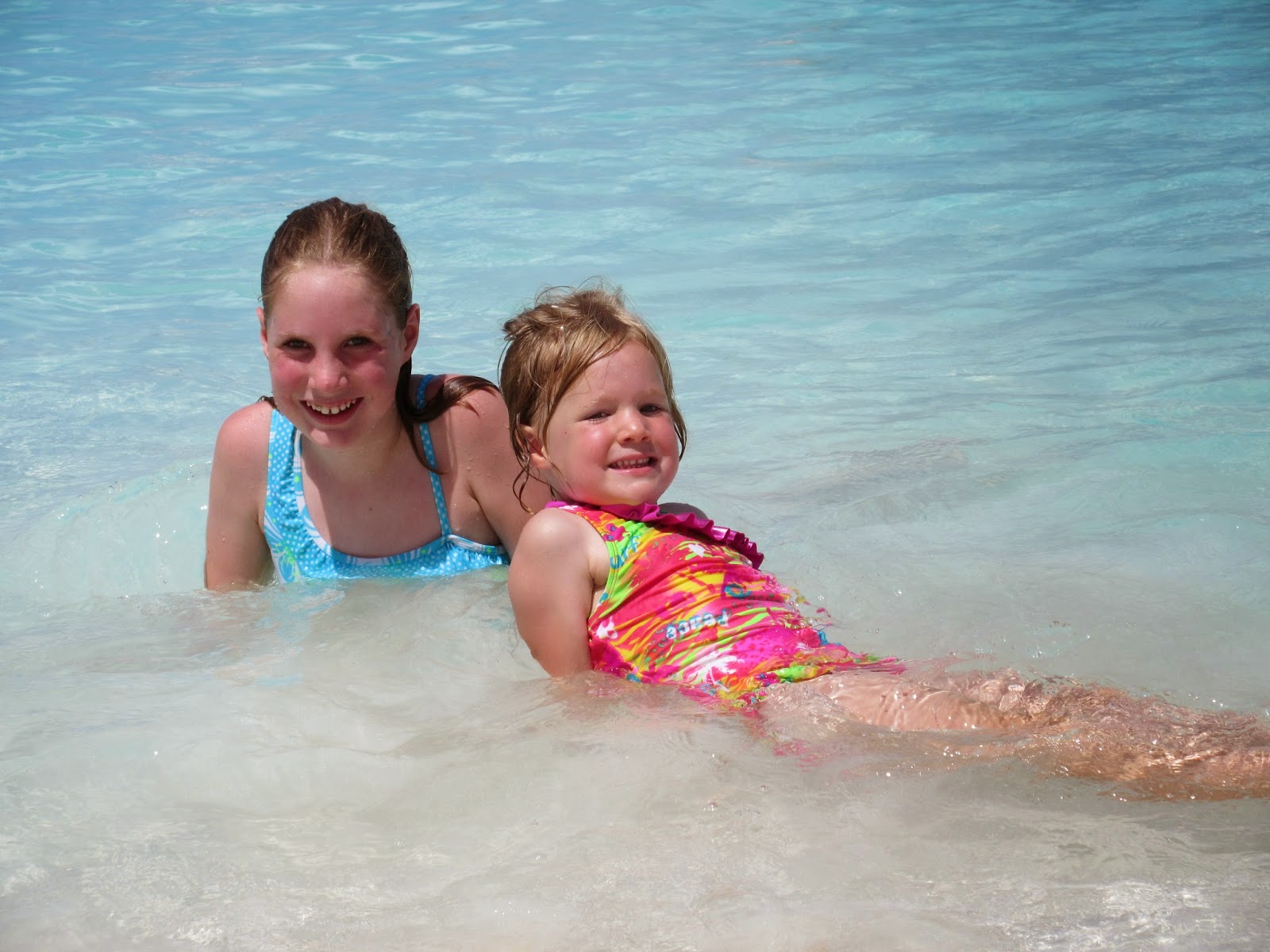 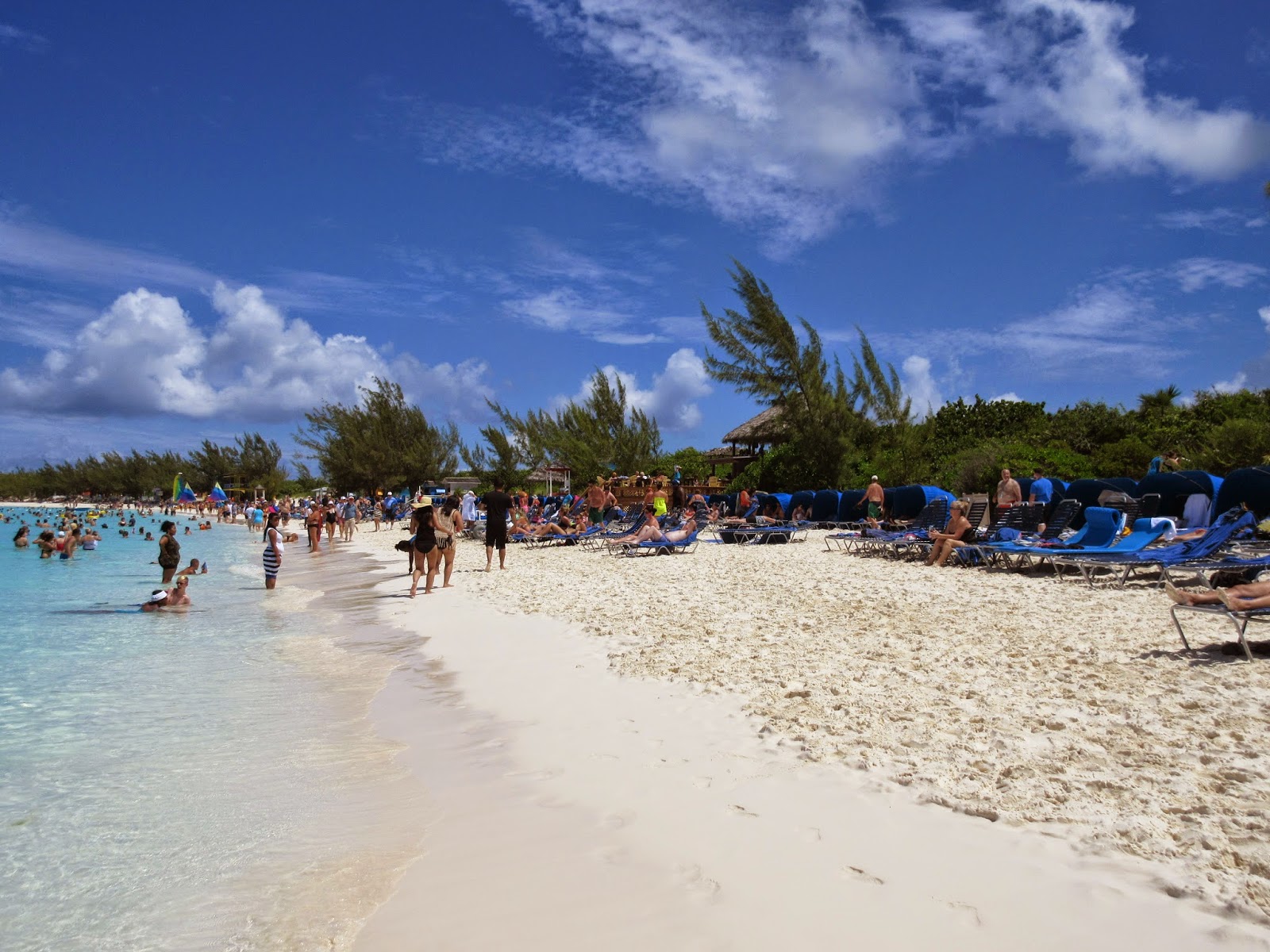 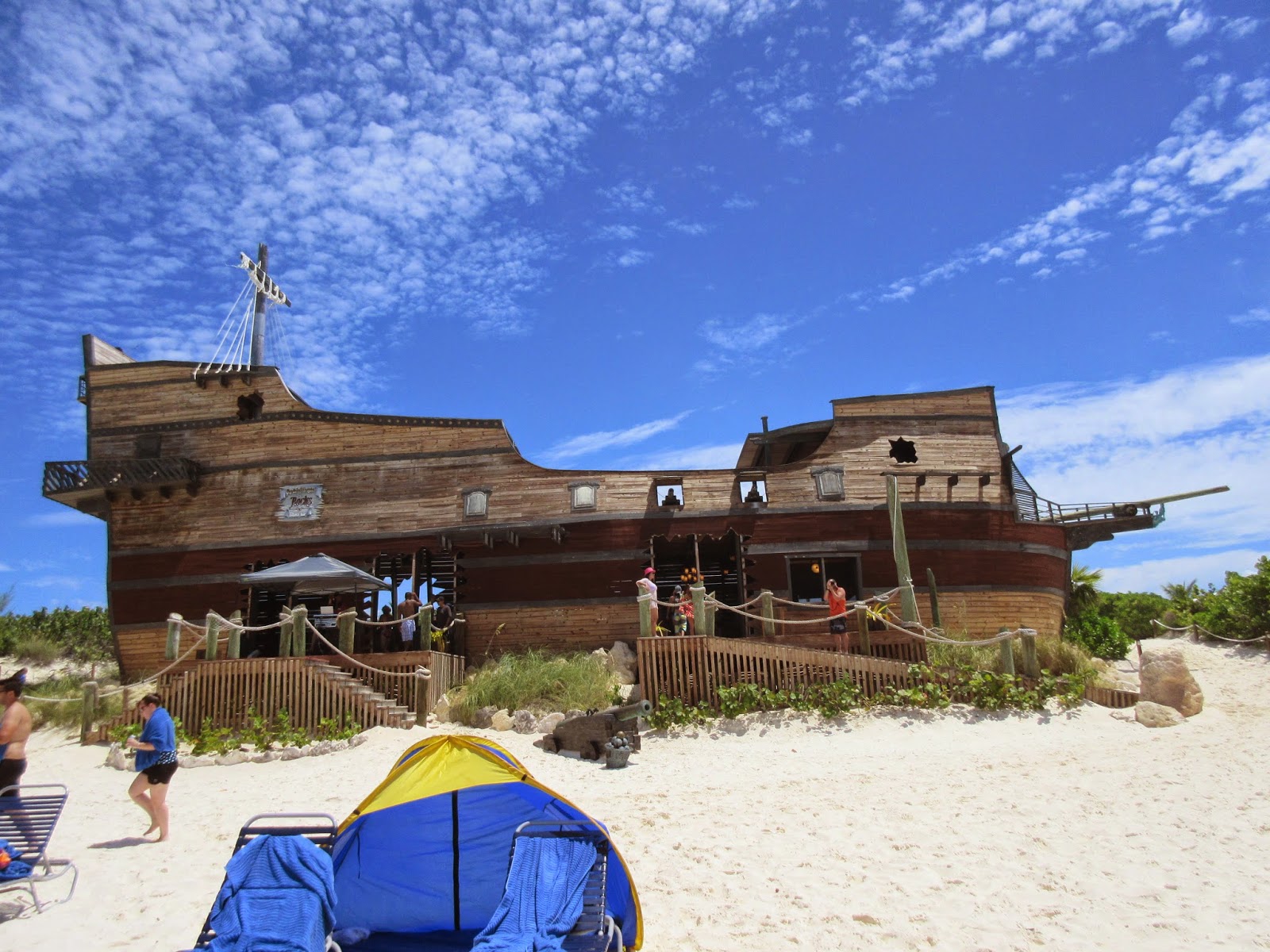 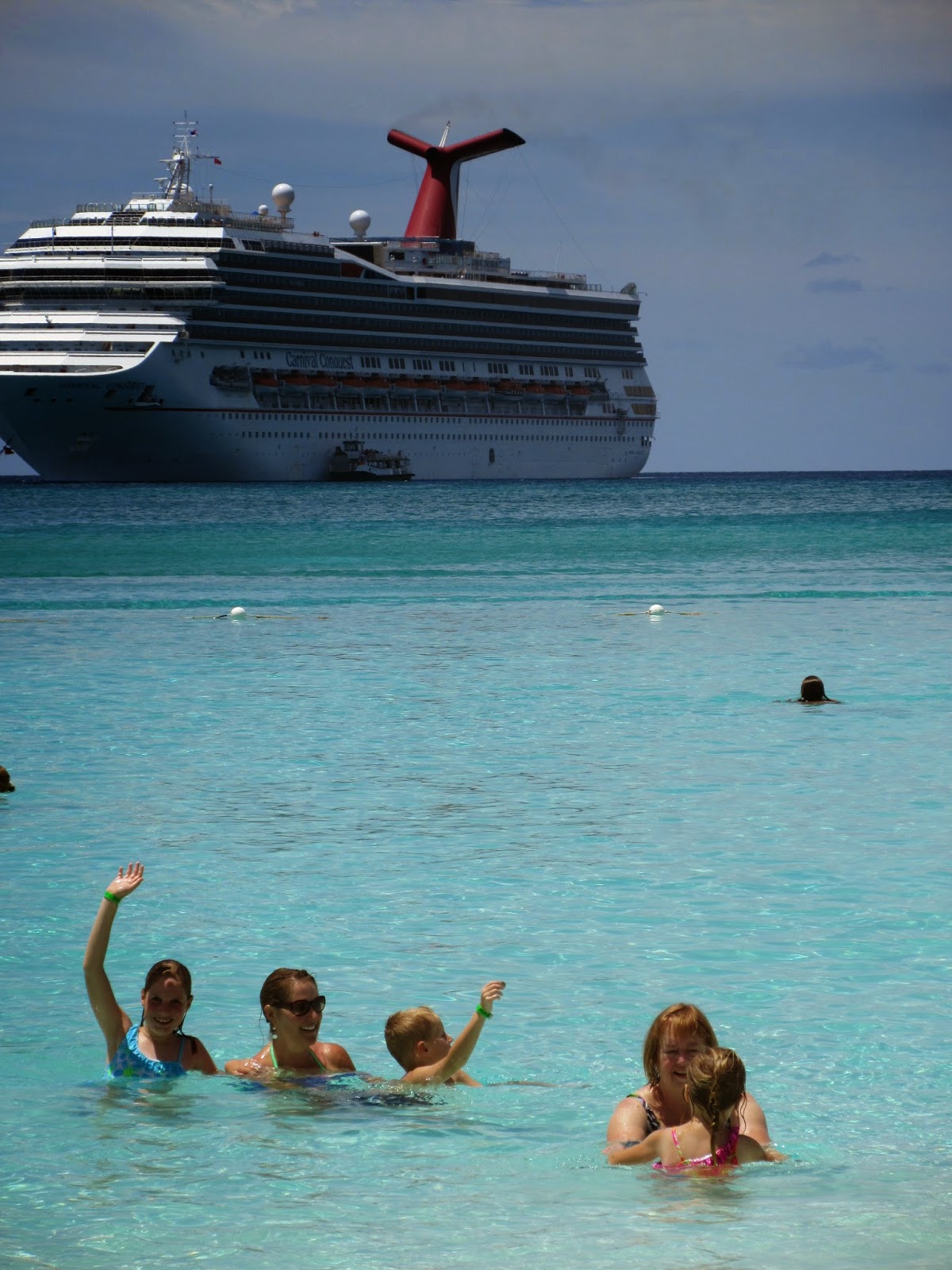 Tuesday was a day at sea.
It was a lazy day.  Not overly memorable.
Eating.  Shopping.  Resting.

Today, we stopped at St. Thomas, U.S. Virgin Islands.
A 45 minute boat ride across Pillsbury Sound took us to St. John.
Steve, who doesn't do well with motion sickness, found himself quite sick.
Dramamine, ginger, and Sprite gave him relief.
Then, we took a shuttle ride about 15-minutes to St. John Beach. 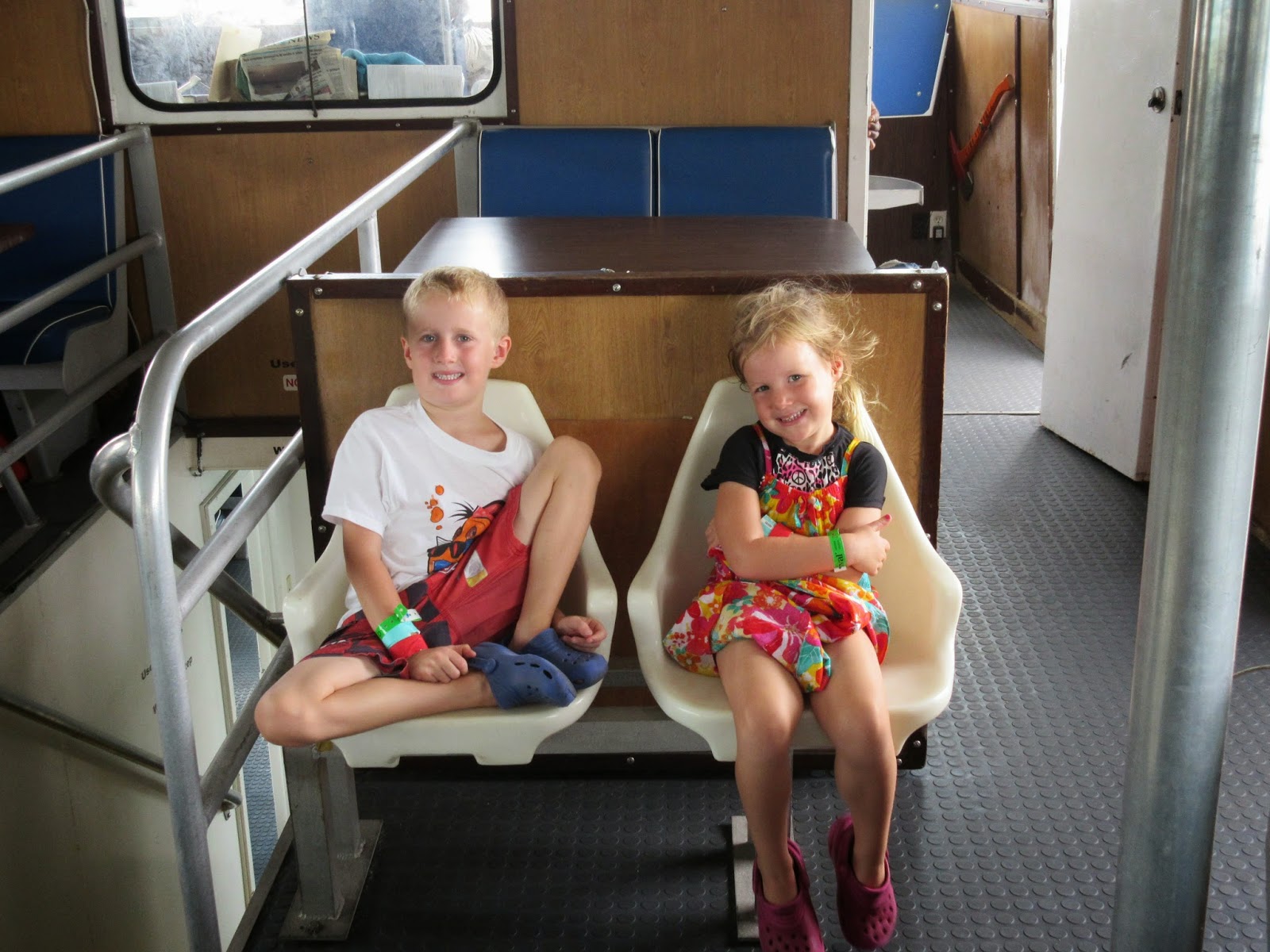 We had 1 1/2 hours to swim in the water and snorkel.
It was my first time snorkeling.
Buddy and I swam out to a small island together.
We didn't see a ton of fish, but we did reach the protected coral, which was filled with sea urchins.
That was enough to send me back to shore. 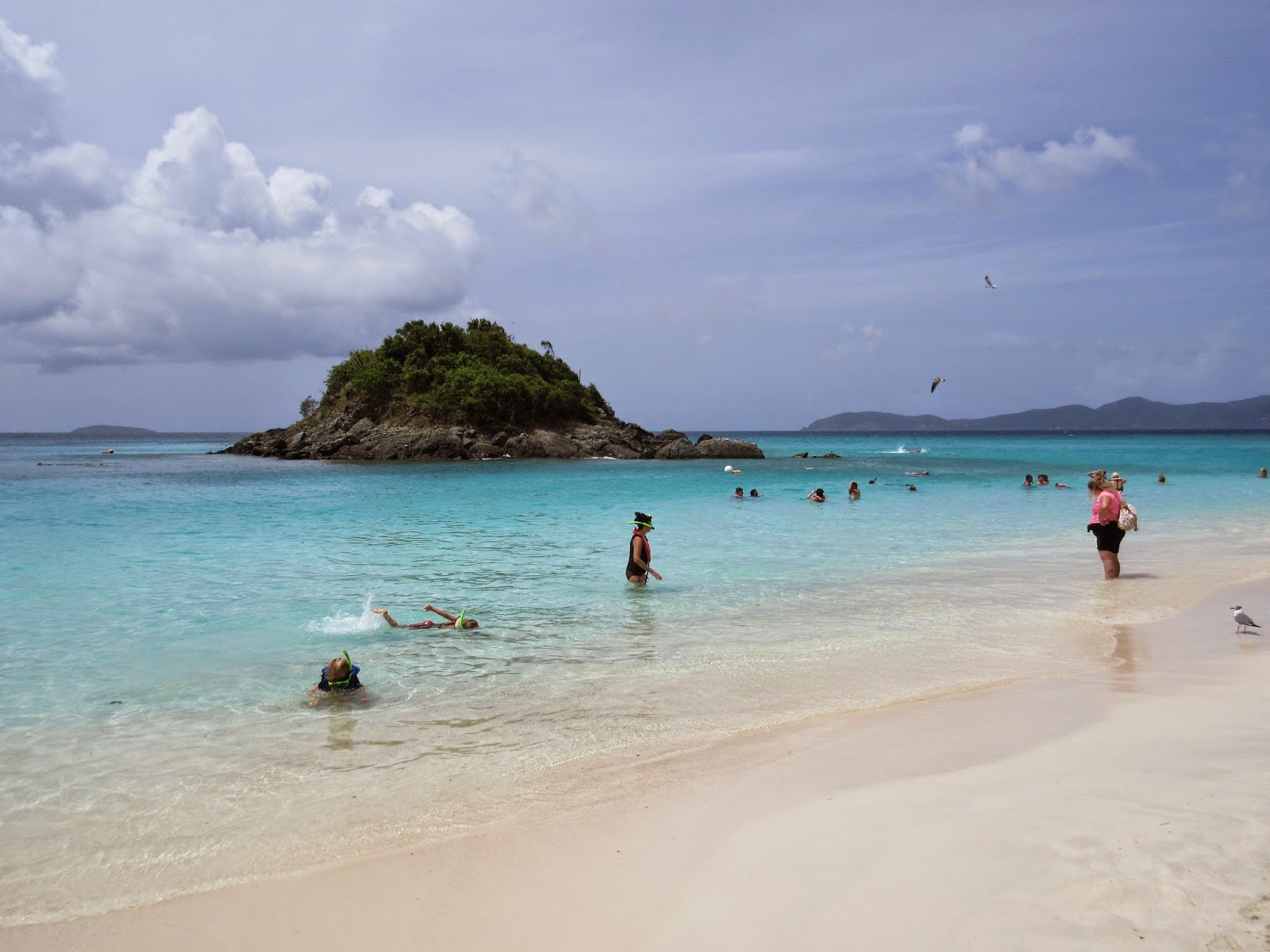 Mom and Shiloh also swam out to the island.
We had been given clear instructions NOT to stand up near the island.
I heard the lifeguard telling some people they should not be standing.
I didn't realize it was Mom and Shiloh until a few minutes after we got back.
Then, Shiloh came in alone (she should have been with Mom).
I could tell something wasn't right.
She started to cry, saying she stepped on something.
As soon as I looked at her foot, I knew.
She found herself a sea urchin.
Five puncture wounds in her left foot.
Mom had three in her hand.


Before we knew it, we were heading back to the boat.
The drive was spectacular.
We drove high above the Caribbean Sea.
From overlooks, we could see Cruz Bay, Caneel Bay, and Hawksnest Bay. 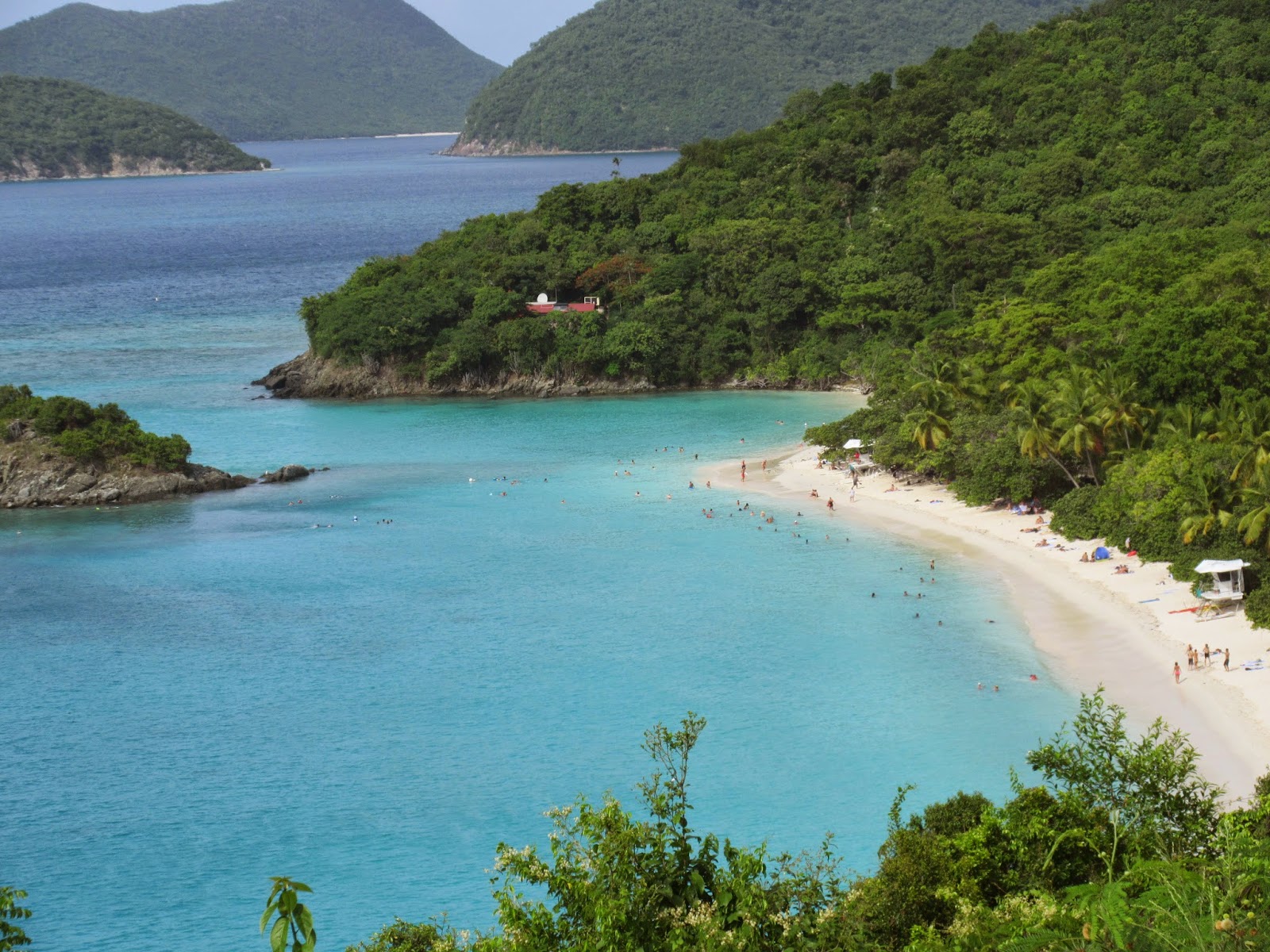 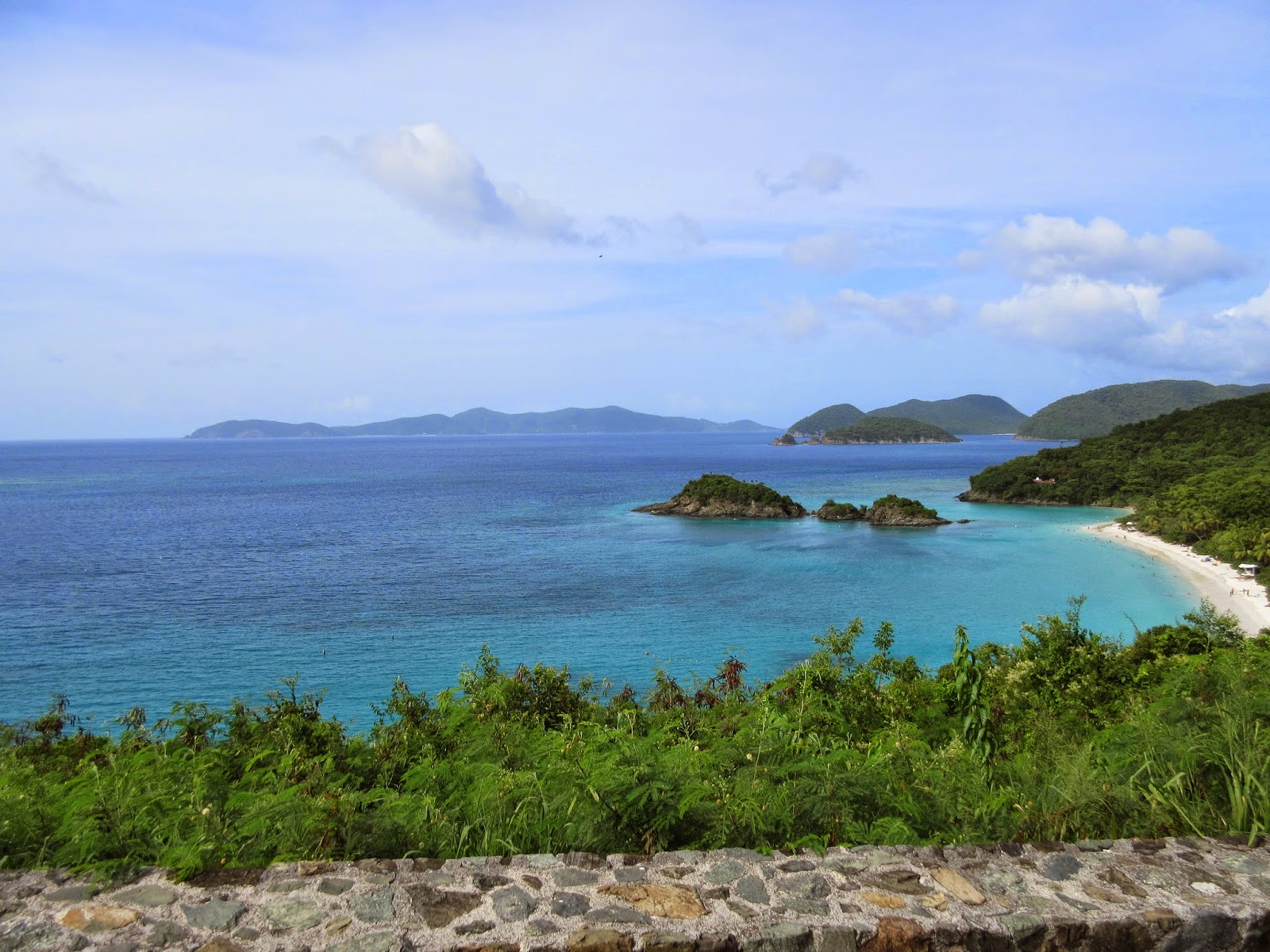 Another 45-minuted "ferry" ride back to the ship.
This time, it was Liberty who wasn't feeling too well.
Steve had taken Dramamine and was doing just fine.
But Liberty hung her head over the boat just in time.